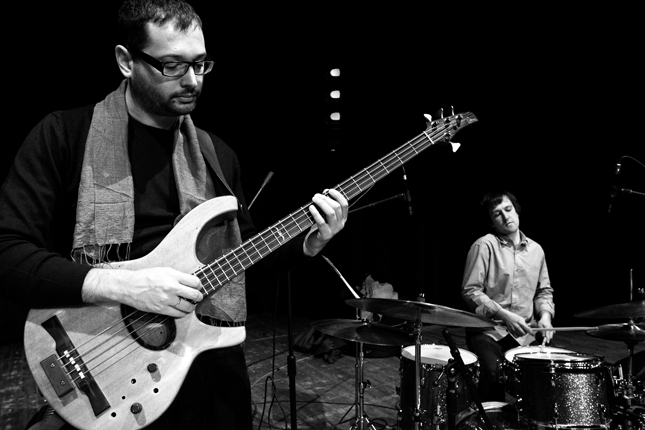 Andrea Lombardini is one of the most original European bass players. In his early twenties he recorded twice with “Randomania” together with Blue Note artist Gianluca Petrella, Roberto Cecchetto and ECM artist U.T.Gandhi. His project as a leader, “ALT” (Andrea Lombardini Trio), won the national jazz contest of Baronissi in 2002 and recorded the year after. In 2004 Andrea won the International contest for bass players Euro Bass Day playing in front of, among others, Anthony Jackson, Daryl Jones, Matt Garrison, Mike Pope. In 2006 he recorded in the US “ALT88” with Bob Gullotti, drummer from the Fringe, and the new rising star of piano Leo Genovese. He is also active with the trio “Chiamalo” with Tolo Marton, the greatest rock-blues Italian player and co leader with “Caffeine”, a power guitar trio with MusicMan artist Daniele Gregolin. Andrea’s last projects are the “Broken Band”, a quintet with some of the most talented Italian and European jazz players playing original compositions and “The Plug”, an acoustic/electric trio with Gianluca Petrella on trombone and Giovanni Giorgi on drums. He also plays with pop-rock rising star Chiara Canzian.

Andrea, who lives in Treviso, Italy, got in touch with me in November 1999; a little less than a year after Steve Swallow bought his first Citron AE5. To my surprise, he wanted the bass built with the same exact specifications as Steve (extremely narrow neck—1 9/16” wide at the nut, with 1/2” spacing between the strings at the bridge) he was going to emulate his hero down to the copper pick. He has since found his own voice, is still playing his AE5, and getting amazing tone. Steve has also left one of his Swallow basses in Andrea’s care so that he can access it quickly should any problems arise while he is on tour in Europe (Steve travels with only one bass).